Are you pissing off your Intrapreneurs?

It was terrible. Head office was sending strategies from the US that just weren’t working in Asia Pac. And it was like no one wanted to know what wasn’t working. People were ticking boxes, making sure they were using the rhetoric of the day. The way to get ahead was not to rock the boat but align to ‘Corporate Direction’. So many followers…..so much politics…..so much wasted time in meetings where nothing was getting done. Same problem, different global meet.

By the time we had written the same problems on flipcharts in workshops in three consecutive quarters on three different continents with the same bunch of people under different headings ‘global marketing conference’, ‘global innovation conference’, ‘Annual European meeting’ – I knew I had to get out. I had become toxic.

I was in endless debates about change with superiors, extolling to anyone who would (or had to) listen about what we needed to do next, and running our part of the world out of synch with global (the way we cut the market was different – market segments rather than consumer trends), the way we structured teams was different,(cross region rather than geographic) and the strategy was different too. I was spending 80% of my time influencing for change against a riptide of ‘that’s not how the US is doing it’. I never thought of myself as an Intrapreneur and I certainly never saw myself as an entrepreneur.  My career started in the blue zone and ended in the red zone (see below). 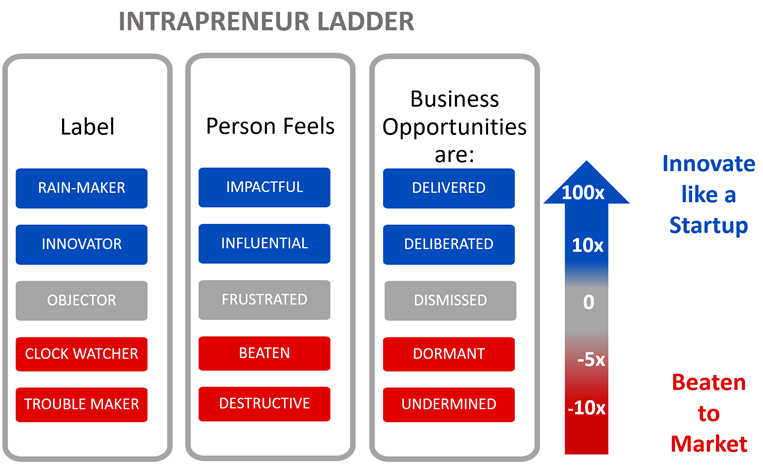 I didn’t have all the answers and I wasn’t always right, thats for sure. But I was pretty obsessed about getting the business better and we needed a sub-culture that supported that.

Intrapreneurs can turn into entrepreneurs when they get frustrated and disillusioned with their current organisation. They become frustrated and disillusioned by lack of business progress from glacial decision making. Do you have people in your ranks that feel like this right now? Could they be considering an alternate career path with a ‘sexier’ company? Or might they be considering starting their own business?

9 Common questions about Intrapreneurs (and my answers)

Born but often go undiscovered and unfulfilled. Whilst they are born, many can be ‘rough’, they can absolutely be developed into the motivated, positive agents of change that market incumbent businesses need more than ever right now

Ecosystem has by far the biggest impact on the performance they deliver to an organisation.  and whether they stay or go. Done well, they can create millions in new revenue and BE the change that most business leaders are seeking right now

Yes, they are described this way as they constantly assimilate a large amount of information to troubleshoot and problem solve. In this way, they develop new initiatives and are often labelled the ‘ideas people’.

Yes, they are prepared to put their reputations, colleague harmony and even their careers on the line to achieve the change they see as necessary to improve business performance

I have found the 80:20 rule to apply here but on two levels.

Get them to take this test to see if they are highly enterprising as one indication.

OR,   look for these 6 behaviours:

Focus them on the future, challenge them to find new high growth areas for the business and make sure the corporate immune system doesn’t kill them when just starting out

Not much. Many would say that Entrepreneurs risk more. Their own money for example. True, but many entrepreneurs were also led by circumstance. Many Intrapreneurs become entrepreneurs when frustrated.  One way to think about it is –  it’s a blurry line but they vary only in the degree to which they seek change, risk and business results. They are at a slightly different point on the same continuum and far away from the ‘average’.

Intrapreneurs and the ecosystem you create for them are an organisation’s answer to getting super high growth projects launched and delivered whilst at the same time retaining this element of your ‘future talent’.

You want to disrupt first?

You want to avoid being beaten to market?

You want to change more but risk less?

You want to do more with innovation than stick coloured post-it notes up on walls, take photographs and go back to work?

Doesn’t it seem just a little silly to be leaving your unidentified Intrapreneurs in the ‘operational’ day to day pool of CORE activities?

And similarly, why would you ask your whole workforce to be more innovative and risk-taking when they are not wired as Intrapreneurs and the core business stills needs to be run?

Play to people’s strengths peeps…There is a tremendous opportunity to catalyse innovation and disruption, to create new markets and to grow your socks off if you identify, develop and empower your Intrapreneurs.

Use your revolutionaries for your next evolution.

View all posts by paulbroadfoot →

Get Paul Broadfoot’s “Outside View”

There are 24 Business Models. Period.
The 3 teams a corporate needs to innovate like a startup (3 min video)